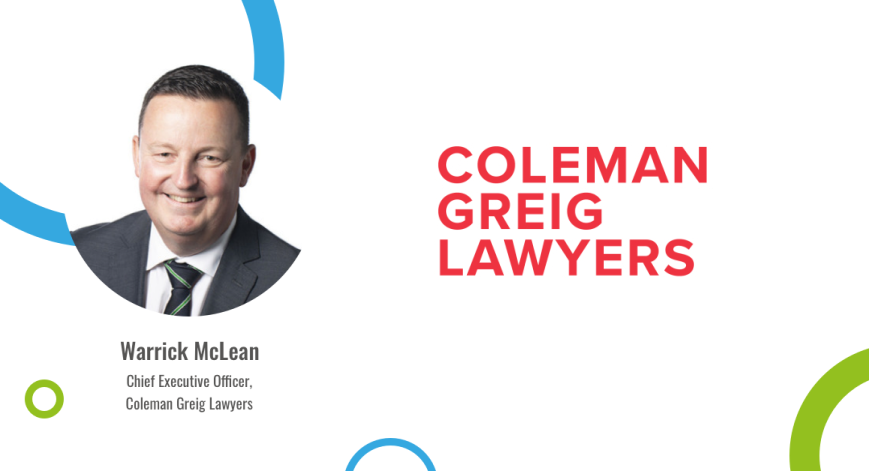 Whether you’re a small high-street law firm or an international commercial enterprise, data is everywhere. With more companies realising the value of analytics (website traffic to client conversions and KPIs), even a moderate-sized firm nowadays generates large volumes of data as part of their everyday practice.

When you know how to use it, this information can be a virtual goldmine, informing business development decisions which affect your organisation’s bottom line. However, for many firms extracting relevant detail from masses of accumulated data, can be a major stumbling block. Unless it’s readily available and easy to understand, it’s all too easy to bypass the hard data and revert back to assumption-based decision making.

Coleman Greig is a leading Australian law firm. As commercial specialists, they act for a variety of businesses, from small franchises to major multinationals. Perhaps unusually in the legal world, they’ve always been big on data, especially when it comes to their client networks. With years of metrics on record, they have always had a wealth of untapped raw information at their fingertips – they just needed to connect the dots.

As a firm with their eye firmly fixed on the bigger picture, Coleman Greig were quick to bring Client Sense on board during the early days of the platform. Since then, they have not only enhanced their data analysis capabilities and gained complete visibility into their networks, but by refining their networking strategies and prioritising their best relationships, they are now winning more business opportunities than ever before.

“Client Sense is incredibly intuitive, empowering our lawyers with knowledge that they have never previously had access to. This technology is not rocket science – but what it does, it does extremely well.”

For any large commercial firm, understanding “who is talking to who”, is an essential part of business development strategy. As the source of most incoming work, external connections are the building blocks of your business – but without shared internal insight, it’s impossible to get a clear picture of where your best opportunities are coming from.

Whilst Coleman Greig have always had a strong historical focus on their client statistics (with over 15 years worth gathered through their CRM), they had never quite managed to compile a complete data set. Their lawyers were routinely speaking to prospects through email, and none of it was being captured by their CRM. Inevitably, this meant that when it came to assessing their referral networks, a hefty part of the picture was missing.

When they adopted Client Sense, solving this problem was the firm’s first priority. The change was immediate, as every external email and telephone communication was logged by the system. As the team began to explore some of Client Sense’s more specific functions, they then started auto-generating preparatory emails ahead of meetings with target prospects, detailing any previous communications that had taken place between the target and any other staff within the firm.

This small change yielded a few big surprises. One partner was particularly struck by what he found when preparing for a routine meeting with an industry networking group. This networking group included a long term target. When Client Sense flagged that the prospect had recent communications with another partner, he followed up the lead to discover that they had already been converted to a client. Not only was this great news for the firm – but it prevented valuable time being wasted on an objective which had already been met.

In the commercial world, no firm is an island. Relationships with other organisations (from accountants to insurers and other lawyers) can be a valuable source of work. The problem is, our image of these relationships doesn’t always match up with the reality. This matters because our perceptions of value influence the direction of our marketing efforts. A misstep can result in missed opportunities when it comes to reputation and revenue.

For Coleman Greig, the key to referrals is reciprocity. As a predominantly commercial offering, there are some areas of law which the firm simply doesn’t do. They send on any enquiries outside of their expertise to other firms – and hope that the favour will be returned. When asked who they thought their most valuable referral partners were, most partners were confident in their answers. However, when they checked their assumptions against Client Sense, the data showed a different story.

Despite some partnerships being perceived as solid sources of work, Client Sense showed that many had not actually made any referrals to Coleman Greig in months, or even years. Meanwhile, some of the names at the top of the system’s referrer list came as a surprise – there were some lesser known organisations who were doing a lot of heavy lifting, but had gone completely under the radar.

These insights have had a significant impact on the way that Coleman Greig approach their professional relationships. They have now re-focused their efforts to ensure that they are acknowledging their biggest referrers – and repaying them in kind. Notably, the firm has since used Client Sense to identify one stand-out relationship with a neighbouring firm who had been sending a lot of family law work their way. They have since formalised this relationship, and now make the effort to ensure that the favour is reciprocated.

“Some might question whether identifying an email here and there is really giving you enough quantifiable information about whether real work is going on. In my experience, there is a direct link between sustained communication and client conversion. Talking to people absolutely leads to work in the door.”

Coleman Greig are a firm with ambition. Their teams are always looking for opportunities to expand into new regions and networks. Once they’ve set their sights on a new target (for example, a new geographic area containing multiple prospective accountancy firms) an individual team will take responsibility for developing these new relationships. However, in the past, the firm has experienced difficulties “sticking to the plan” when it comes to keeping up engagement with intended prospects and meeting set KPIs.

Once the firm realised that they could use Client Sense to proactively manage these new pipelines, it was a game changer. They started setting up their new targets on the system from day one, and installed progress checks on weekly agendas. With the click of a button, it became easy to monitor how much activity was actually going on – and some significant gaps emerged. In one region with ten target accountancy firms, for example, they immediately saw that whilst six were on track with engagement, the rest had gone quiet.

Because they know that sustained engagement equals work through the door, the Coleman Greig team took these insights seriously. They now use this information to make sure that they follow through, and actually talk to the people that they said they would. It’s no longer a matter of trying to “fix” lapses in communication after the event – because Client Sense is on top of things, the reminders come through long before the ball is dropped. The result has been a markedly improved success rate in new approaches.

Not only has Steve always been highly engaged when it comes to improving his own product, he also constantly challenges our own thought processes and encourages us to be better. He has a vision for Client Sense, and that’s really exciting to be part of.

For Coleman Greig, adopting Client Sense has never been a case of simply buying a product and walking away. Both teams were particularly drawn towards working together from day one – the firm had already been looking at similar products internationally and were keen to be able to support an Australian provider. As for Client Sense, they were excited to work with a rare breed of lawyers who were already highly engaged with their data, and who had a genuine appetite to get more out of it.

Like any strong partnership, this collaboration is now defined by mutual encouragement for both sides to achieve their best. The Coleman Greig team have been impressed by the ongoing engagement that they receive from Client Sense, who are always on hand to offer technical support, and to identify innovative and tailored ways for the firm to make the most of the system.

Coleman Greig view Client Sense as an ongoing opportunity to enhance their existing CRM capabilities – and have their own ideas about features that they would like to see from the product in the future. They would like to achieve full integration between Client Sense and their client intake software, and are hoping to one day be able to use Client Sense to identify and rectify gaps in their existing CRM. With both teams intent on pushing the technology to its full potential, this partnership is one to watch for the future.

We use cookies to ensure that we give you the best possible experience on our website. Continuing to use this site acknowledges your acceptance.Ok